Words no person should hear… You Have Cancer

There are three words every person wants to hear – “I love you”, “I miss you”, “you’re my everything”, “I need you.” But there are also three words no person should hear – “I hate you”, “You are nothing”, “I’m leaving you”, “You have cancer”. It was later part of that list that I experienced more than once before. But never so quickly.  I was in surgery for my back, when I awoke from it to find my doctor informing me that after cutting in, he found a tumor on my spine and was not sure what it was, so he took a sample and closed me up to wait and see what the outcome would be. I just cried as I did not fully understand what was going on.

I left the hospital confused and sad…hoping for the best but knowing my luck, getting worse. Days past until finally I got the phone call; “Sorry Michelle, you have cancer”. I fell to my knees and sobbed uncontrollably. I did not want to face this once again. All I could do was face the reality that cancer was trying once more to take me out. But being a mother, I cannot give up. After I ran out of tears, I decided that I needed to face the fact that I was gonna have such a hard road ahead with no guaranty that I would make it to the end. But I was not gonna give up without a fight – or some sort of plan. I went to see the cancer specialist and it was there that my hopes were shattered. Where the tumor was is considered an extremely high risk area in which no doctor would agree to cut it out. I would more than likely lose my life right then – and it was better to just take the chemo and pray for a small miracle. So I sucked it up and said “ok”.

My first treatment was hell – horrific pain …unable to keep anything down …unable to do much of anything as I felt as weak as a newborn pup. Sadly I have no support system here. I found out about my cancer and how extreme it was until right before I moved to Alaska. Here, I have no family or friends to help guide me through this. But I do have two amazing and loving young men that want to do nothing more than to make me feel loved – and they try their hardest to make me feel comfortable. I am grateful to them…but I also met someone so special during a time when I needed someone the most. I met my fiancé a few months ago from a dating app. He was the first to message me and right away I thought I was being played. I saw his profile and could not believe such a handsome caring man would really want to be with me – especially after I had shaved my head due to it falling out during chemo. I did not reply back to him but he could see I read his message. He sent another message to me the next day and I thought “I could at least text him and get to know him even if only as a friend.” After messaging for a couple of weeks, we decided to face time for the first time and I was so scared. I did not tell him I shaved my head – the pictures he had of me until then were ones I had my long, red hair with. I was afraid he would take one look at me and think what I fear is being said about me. After I shaved my head, I became a recluse and stayed in my room all day long. I was afraid that others would be ashamed to be seen in public with me and my pale, egg shaped head. I knew I had to tell him the truth before he saw with his own eyes. So that night, I finally came clean. “The truth is, I found out I have cancer right before I left Tennessee and I have been going through chemo. It has been super hard on me, but I also could not deal with the depression of seeing my hair falling out and so I shaved it. I will totally understand if you wish to find someone else – sorry for wasting your time.” But he surprised me. 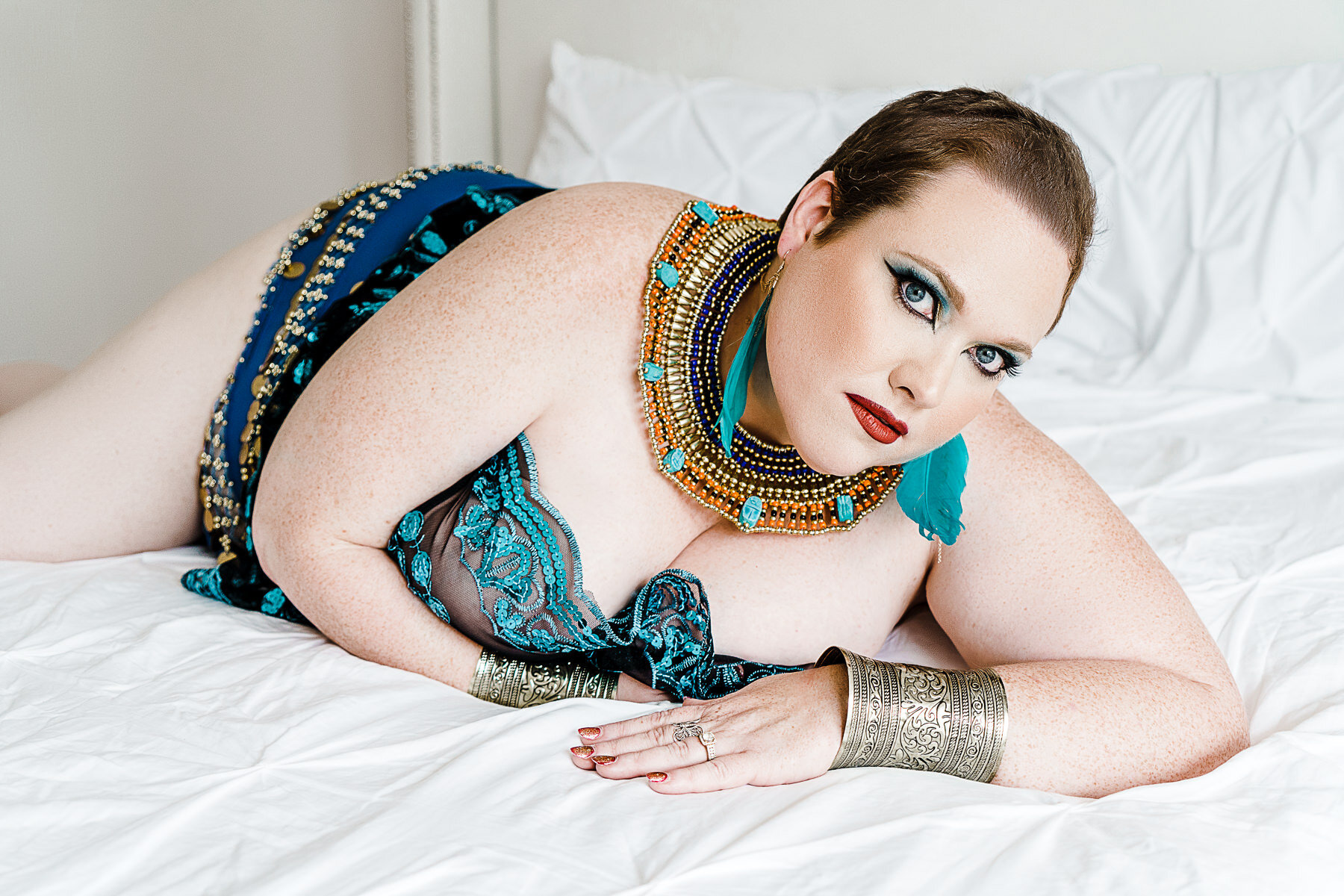 The next day was the day we planned on face timing. I did not think he would call after my truth about my health. But sure enough, the time he said he would call he did. I was shocked! I answered with a nervous smile only to see not only did he call me back – he had shaved his head! “Hello baby! I thought I would show you support by shaving my head as well….I am with you, baby. I always proud to be with you.” I could not stop crying. And it was then on that I began to see myself as beautiful. He helped build up my confidence and self worth – but he also showed me that beauty does not come from a head of hair. It was then that I started thinking. I know that the outcome is bleak but I do not want the last visions for my children to be a frail, sickly bald woman. I thought I would  do something for the men in my life – and could not think of anyone else that could help me with this more than Kristen. 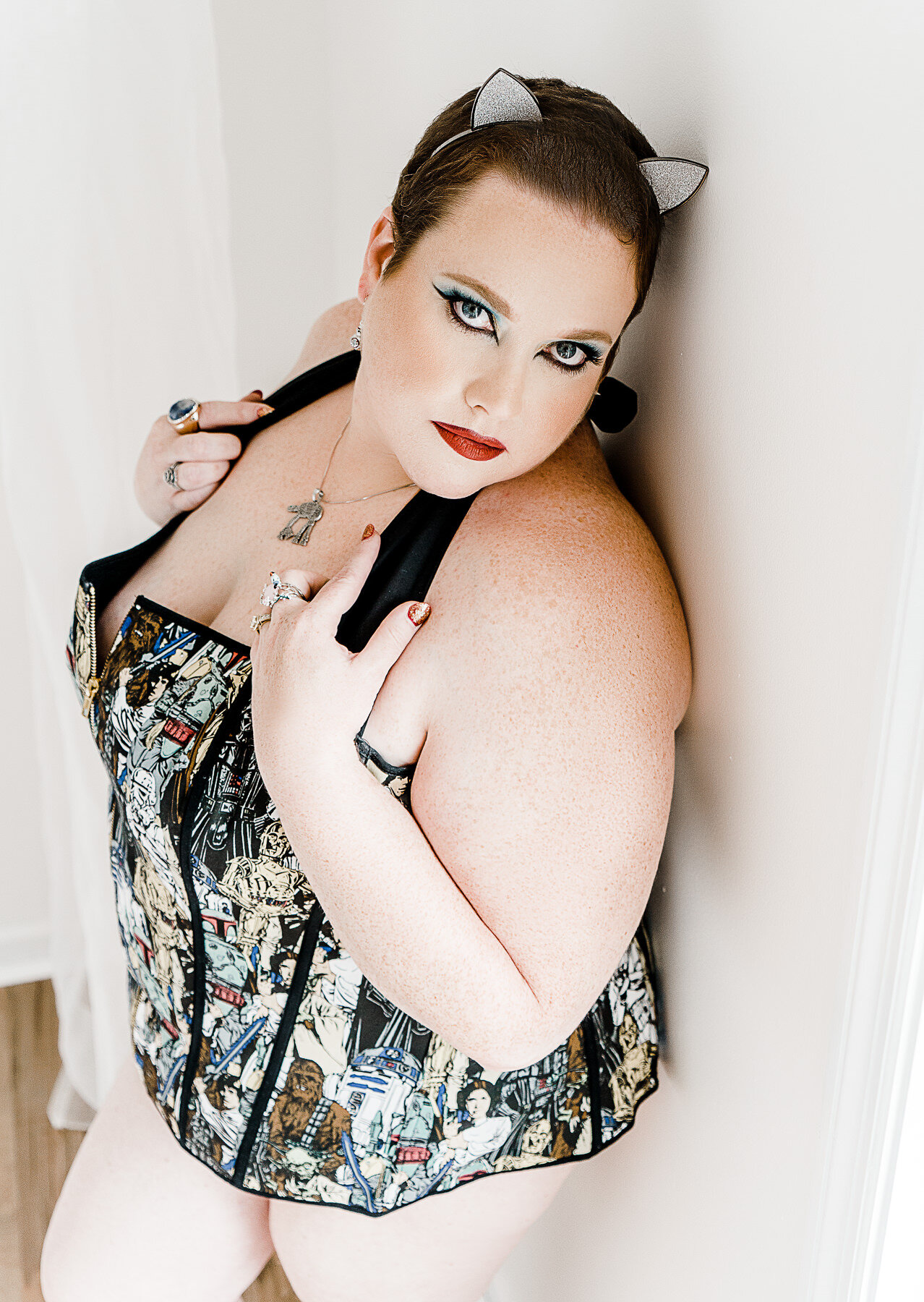 I met Kristen last year during my first photo session. She was so kind and enthusiastic about everything. She made me feel comfortable, but more importantly she made me feel beautiful. I had done a bedroom session once before, but the one that did it did not give me encouragement nor did she listen to me. I was a little skeptical booking with Kristen as I did not want the same results as my last. But I truly wanted to do something for me and for my boyfriend (at the time). I know I wanted certain looks and poses that I wanted to come to life in a picture. Much to my surprise, Kristen was the complete opposite from my last one. Not only did she make me feel beautiful but she also listened to me – she loved my ideas and was more than willing to make them come true. She made me feel like I had a voice and that I was in control of the shoot. To me, that meant the world! She encouraged me all the way – from the day of the shoot to the reveal, Kristen was truly amazing. She acted more like a friend than a photographer. And with that, I knew I could trust only her to bring out what I wanted to have done. 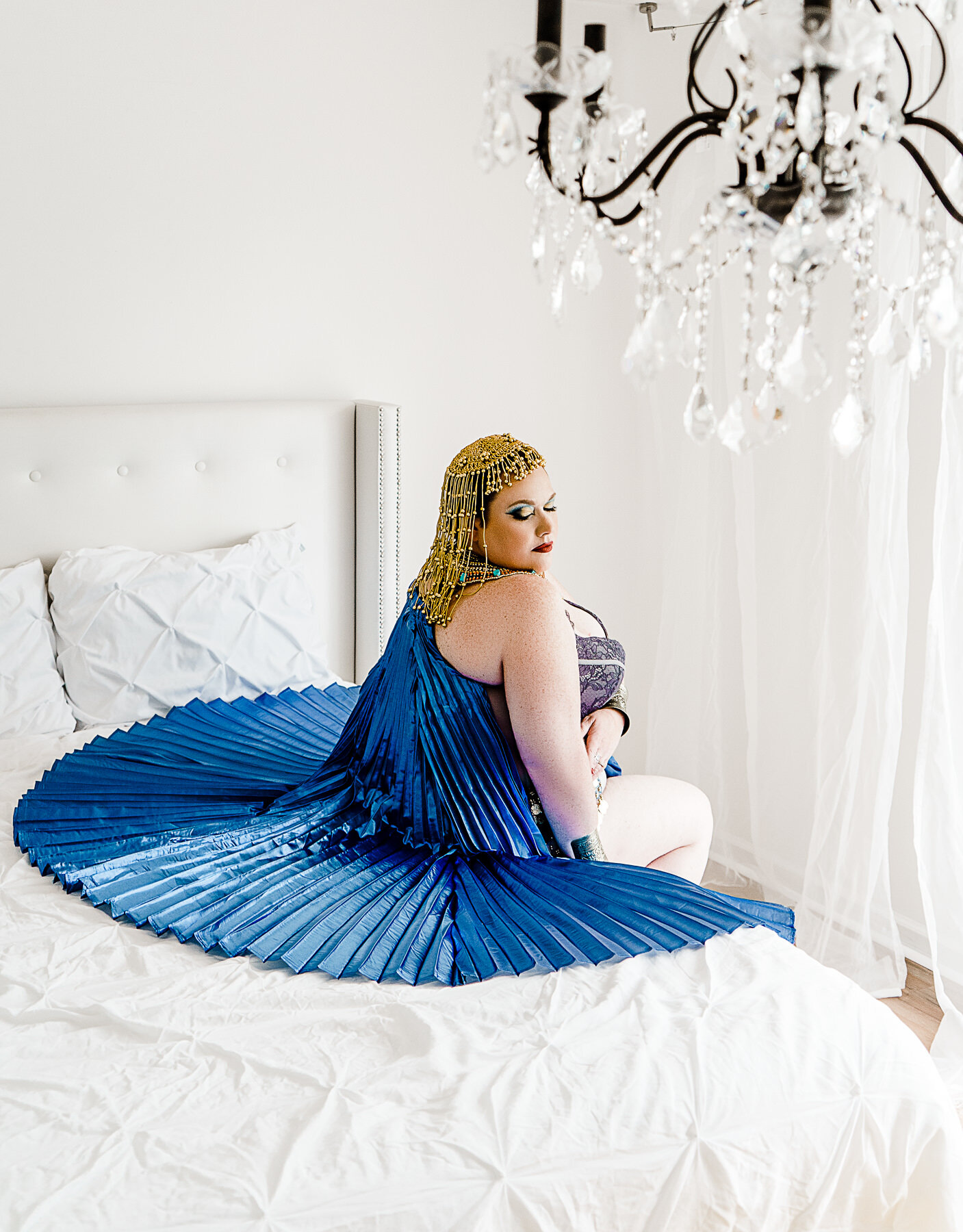 Though I moved to Alaska a few months ago, I still wanted Kristen to do my shoot – so I reached out to her on Facebook. “I want to do something special for my family,” I explained, “You see, I found out I have spinal cancer and it seems that there is little hope for me.”

“I am so sorry to hear that,” Kristen answered, “I wish there was something I could do for you..”

“Actually there is. You see, I do not want the last images of me to be sick and weak for my family. I would like to create some looks that would help them remember me as I was before all this. And there is no one in the world I would trust for this than you.” 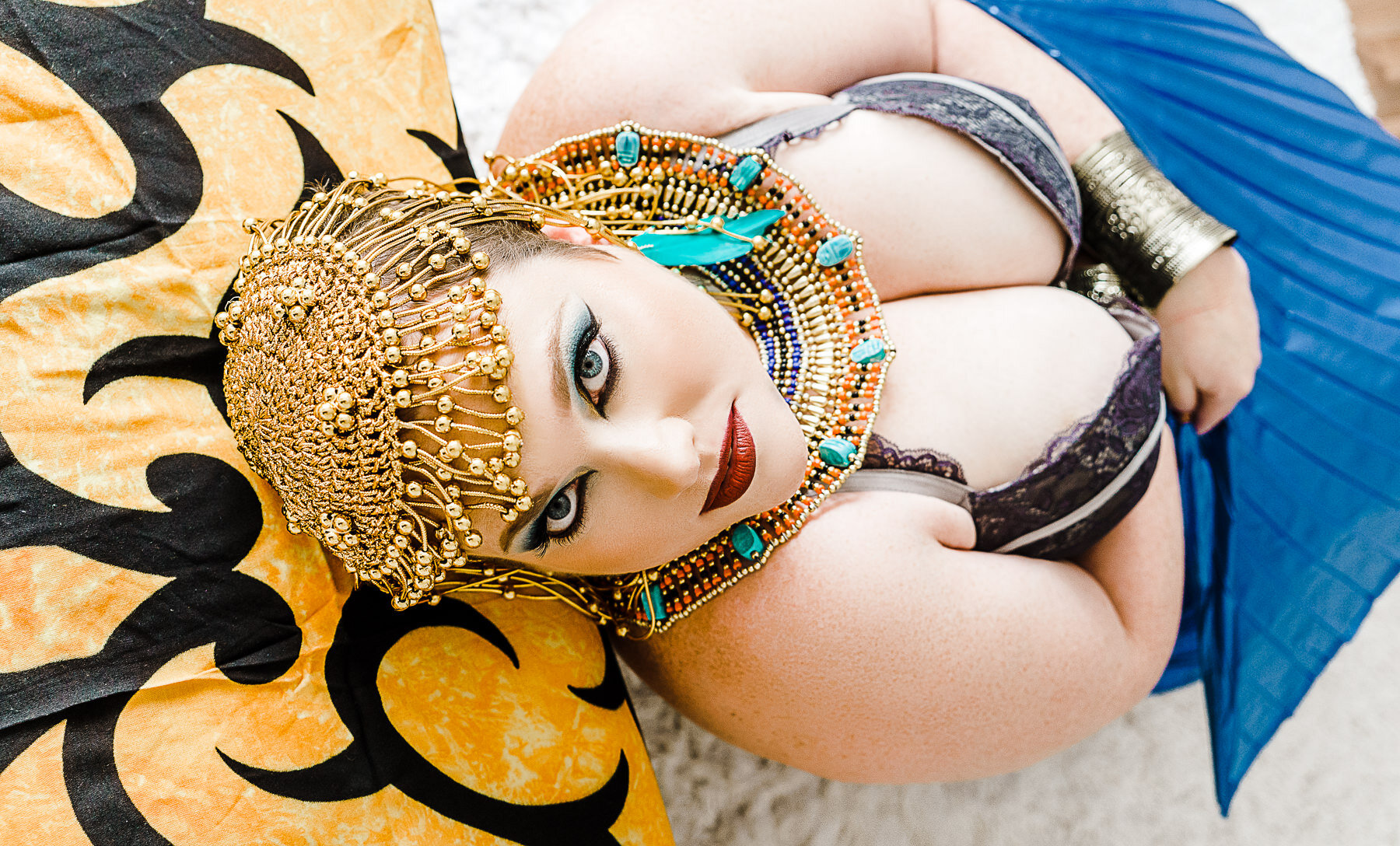 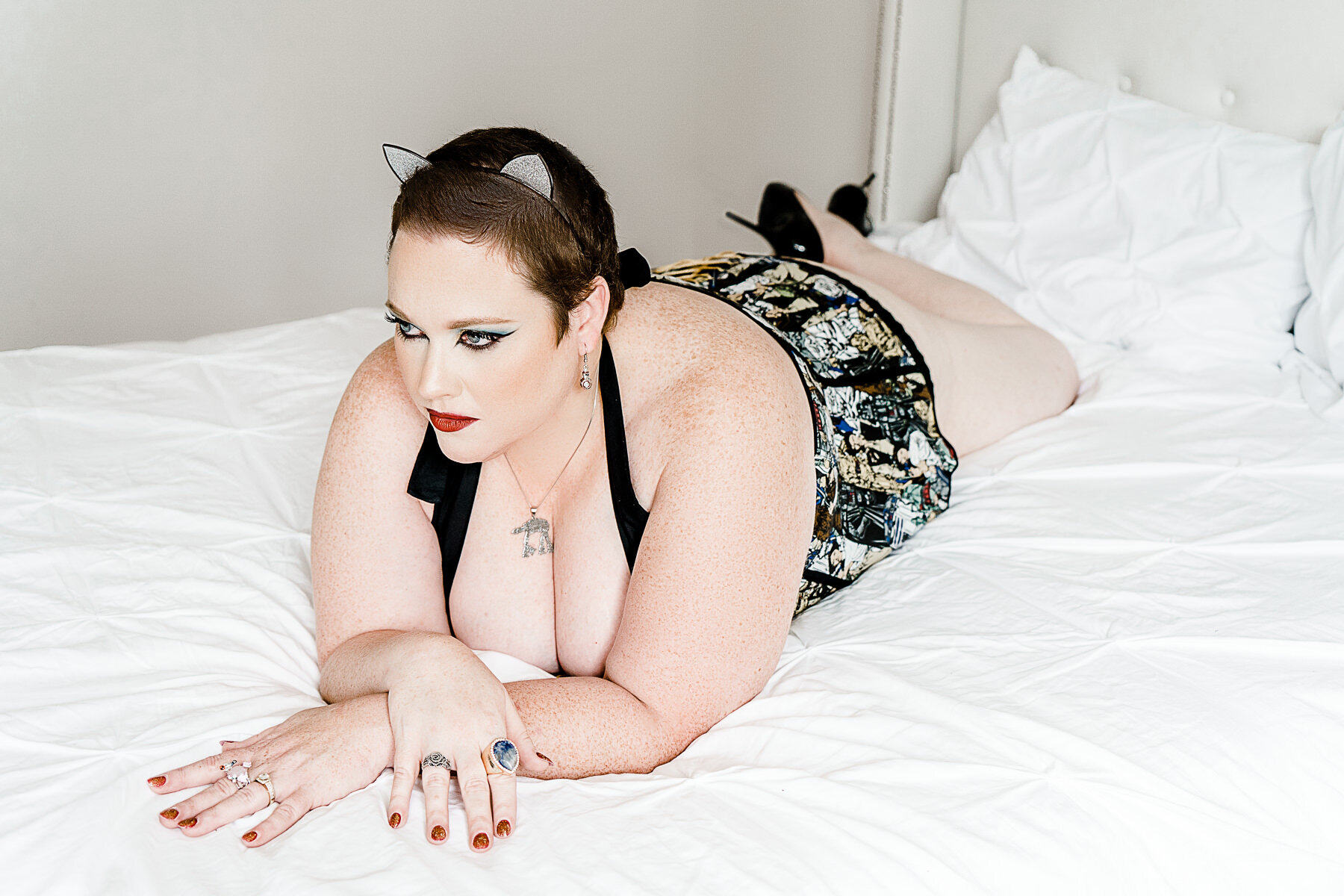 So I go on explaining my wishes and Kristen was more than willing to make sure that she could do my shoot while visiting my family and friends back in Nashville. I want my last images to be beautiful and loving, so I chose a formal look first. Trying to come up with some more looks, I thought about which one would portray me as a strong woman instead of a sick one. Then it hit me – ancient Egyptian women of power shaved their heads but yet they were still beautiful. So I took that idea and then began to think of something else. My mind began to think back at where else I saw a powerful woman who did not let their lack of hair stop them – and once again, it hit me. I love Star Wars and there was a villain that stood out above all else – her name was Ventress. So with finding all of my looks, I informed Kristen of my ideas. “I want to not only do something special for my loved ones, but also show other women who are going through the same thing I am, that beauty is forever. It does not matter if you are big or small, short or tall, or losing your hair….you will remain beautiful. From Queen Nefertiti to the non fictional Ventress, women do not need hair in order to be looked upon as beautiful.” I stated.

“Oh wow I LOVE that idea! I cannot wait to see what you bring!” Kristen answered with such excitement in her voice. I know this blog is rather long but I wanted to make sure that you understand my story. That you know that you are beautiful….you are loved..no matter what bullies or angry people might say – you are ALWAYS beautiful. So ladies if you are going through cancer, do not feel ashamed to take a step forward and show your strength – Kristen has been so wonderful through all this and I thank her so much for helping me feel extraordinary.

She brought to life my wishes and proved to me that I am strong. Do not let your lack of hair stop you from bringing out your sexy. Hold your head up high as a queen never bows. You are fierce and you are strong – don’t let the world make you feel differently. And always remember to tell those you love just how much they mean to you. Time is against us all and we never know when our last day will be – but for now I remain strong for my family, my fiancé, and my friends. I am not giving up – and neither should you. 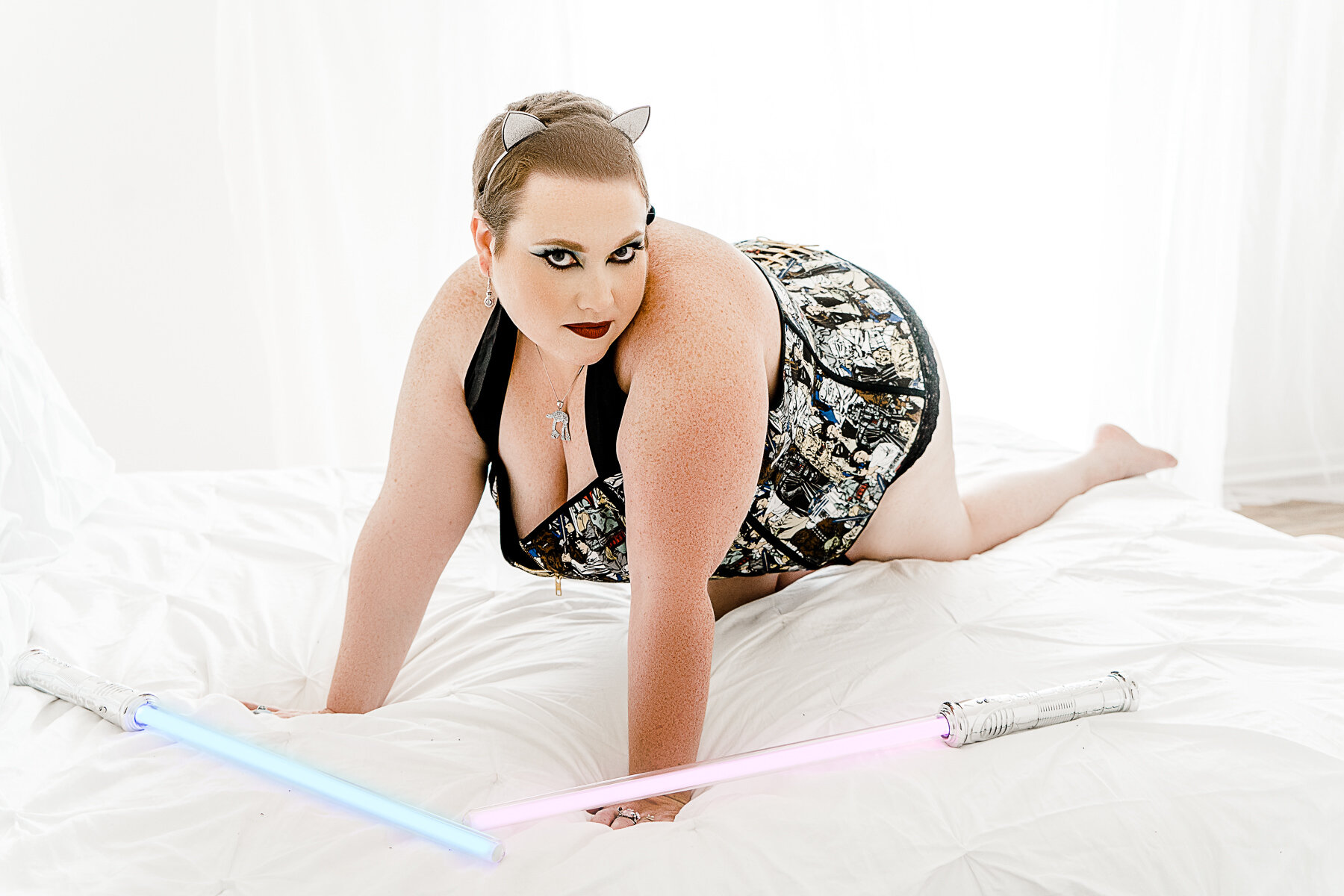